Slack key guitar is a secret music of Hawaii. For over a hundred years it developed on Hawaii’s ranches and in private homes, but was not shared with visiting tourists. Since the 1970s, slack key guitar music has come out of hiding. Many now recognize it as an authentic and traditional Hawaiian art form.

Here’s a video from that show that features three masters of slack key guitar: George Kahumoku Jr., Garrett Probst and Peter deAquino. Furthermore, you don’t have to listen to the entire five minutes to notice several features of the slack key guitar tradition.
– An easygoing ballad, in this case the song “Nani Kauai.”
– Vocal harmony, plus the use of falsetto voice in some verses.
– Accompaniment by both guitars and ukuleles.
– Verses that are purely instrumental, without vocals.
– Modulation to a different key before the concluding verses.

Note: The photos in this article depict slack key guitar masters who are currently active as performers. Moreover, if you click one of those photos, it will take you to a video performance by that artist or artists. Enjoy! 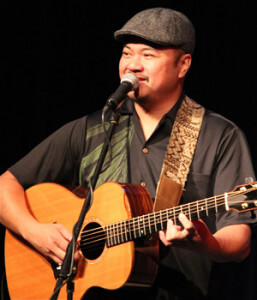 Spanish guitars arrived at Hawaii not long after the first Europeans. The guitars came with Mexican cowboys [vaqueros] who taught the Hawaiians the skills of cattle ranching, and as items of trade.

The Hawaiians taught themselves to play. Since most players were self-taught, they used a variety of playing styles. Some styles were European and others we uniquely Hawaiian. In addition, they invented new ways to tune the guitar. Some tunings provided a “drumbeat” bass line reminiscent of chant. And other tunings provided a distinctive sound texture to match a particular song.

Slack key guitar tunings are usually modifications of the standard guitar tuning EADGBE (lowest note to highest). However, the guitarist then “slacks” one or more strings. That is, he or she adjusts strings to a lower pitch by loosening the tuning peg. Although the change is never more than a step or two, that is enough to transform the instrument. 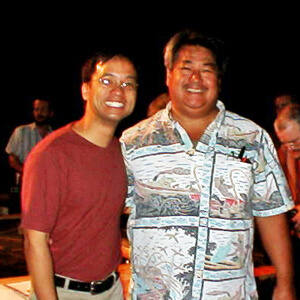 When you strum a traditional guitar without fretting the strings, the sound is a hodgepodge, not a true chord. However, strumming a Hawaiian slack key guitar will sound a major chord, a major sixth, a major seventh, or a blend of two related chords.

There’s a longer version of this article at Art’s science website. That article discusses specific tunings and playing techniques, and gives additional video examples. Especially relevant for this article is this point: slack key guitar has a distinctive sound and style, one that blends well with the lilting syllables of Hawaiian songs.

Where to Hear Slack Key Guitar 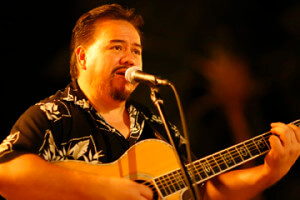 You may get lucky and encounter slack key guitar as background entertainment at a restaurant or hotel. However, those may not be the very best performers. The most skilled players want – and can get – an audience for a full show. At such a show you are likely to hear a variety of pieces. Those may include: pure instrumentals; songs sung in Hawaiian (and sometimes in English); and guitar-ukulele duets.

When you’re staying at Honokeana Cove, you’re only half mile from Maui’s best slack key guitar performances. Those shows appear every Wednesday (and often, Thursday) evening at Napili Kai resort. Slack key guitarist George Kahumoku Jr. hosts the show. The name of the series is Masters of Hawaiian Music. It features many well known players of slack key guitar.

This show won a 2015 Certificate of Excellence from TripAdvisor. Also, it is generally a highly rated attraction. Nancy Kahumoku’s YouTube page features many videos recorded at this show. Show tickets are $38 in advance for two hours of music. The audience typically numbers 100 to 150.

Every Hawaiian island holds annual slack key guitar festivals, and Maui is no exception. If you visit Maui around the end of June, try to catch the Kī Hō’alu [Slack Key Guitar] Festival. It provides a full afternoon of slack key guitar performances at the Maui Arts and Cultural Center in Kahului. Also, there is a Ukulele Festival at MACC in October. Check their Festival Calendar for these “Annual Events.”

Now’s a good time to book your Maui vacation!

Sonny Lim in 2008 at the Fairmont Orchid’s Sunset Terrace on the Kohala Coast of the Big Island, posted by WaikoloaBill (Bill Adams)