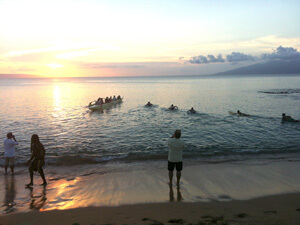 Sea burial is a heart-felt and respectful tradition carried out in Hawaii. It is an established ritual for native Hawaiians. However, non-Hawaiian visitors fall in love with Hawaii and sometimes request burial of their ashes there. Once in a while when you visit a public beach in Hawaii, or even at Honokeana Cove, you may witness a sea burial ceremony to honor a departed family member. 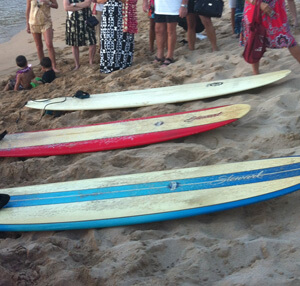 Most visitors to a public beach are intent on having fun. Therefore, when you see a serious-looking group gathering on the shore you know that something out of the ordinary is afoot. They will be wearing street clothes rather than swimwear, and some may be weeping. Surfboards are lined up at one side for use by participating family members. Also, you will notice a guitarist, softly playing and singing a song in Hawaiian. Family members will take turns sharing their memories of the deceased.

Beginning of a Sea Burial Ceremony 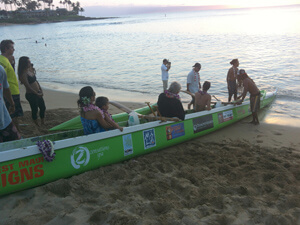 After everyone has spoken, the older members of the family gather by an outrigger canoe pulled up on the shore. The canoe is the vehicle of honor for the ritual. The canoe carries the ashes of the deceased, as well as the surviving matriarch or patriarch. Anyone who is infirm or too young to paddle out alone may also ride in the canoe. Family members and friends bring lei and gently place them in the vessel.

When all is ready, several men launch the canoe. Men riding at both ends of the canoe paddle it. As shown in the photograph leading this article, the canoe then heads out to sea. Family members riding on surfboards accompany the canoe. (You may click upon any image to enlarge it.)

Sea Burial of the Ashes 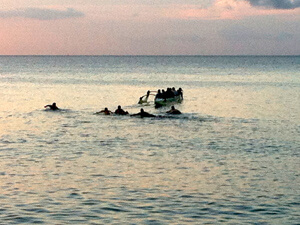 When the group attains a few hundred feet from shore, they consign the ashes to the sea with a traditional prayer or chant. The mourners scatter lei and flower petals on the water to join the ashes drifting on the surface. The participants return to shore where family and friends remaining there greet and hug them.

If you’d like to see more photos of the sea burial ceremony Art attended in 2013, see his website article on Sea Burial.

A famous sea burial occurred in 1968 in Honolulu, in honor of Duke Kahanamoku. Duke was a five-time Olympic medalist in water sports between 1912 and 1932. Moreover, during most of his lifetime Duke was the world’s best-known Hawaiian. He was the principal person who popularized the sport of surfing, which was previously known only in Hawaii.

Duke Kahanamoku died of a heart attack at age 77. Not surprisingly, many people wanted to honor his memory. As a result, they conducted a sea burial ceremony off Waikiki Beach in Honolulu. The following description of Duke’s sea burial gives an idea of the intense feeling and emotion associated with Hawaiian sea burial today:

The beachboys sang their farewell song “Aloha Oe” and the shoreline of people began to weep. Duke’s ashes were paddled out to sea by an armada of outrigger canoes and surfers. Nadine Kahanamoku scattered his ashes into the sea. The mourners in the canoes, boats and on surfboards threw flowers and flower leis for Duke. Soon the ocean was a blanket of flowers and Reverend Akaka spoke amongst the tears, “Paoa was a man of aloha. God gave him to us as a gift from the sea, and now we give him back from whence he came.” A rainbow formed over the island, as the canoes made their way back to the beach.

Note: As a reader has correctly pointed out, a lei can entangle sea life. A more earth-friendly approach would be to scatter only flowers and flower petals. A modern lei can be made harmless by cutting the thread and pushing the flowers off into the water; retain the string for safe disposal on land.

Sea burial is one of the many customs that sustain and honor the traditions of the Hawaiian people. For more about Hawaiian cultural history, see this website’s Feature Stories on Hula and Slack Key Guitar.

Why not start your own Hawaiian tradition? A visit to Unit 114 Honokeana Cove could be a good beginning.