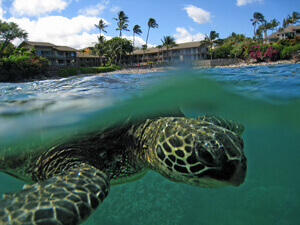 Green Sea Turtles help make Honokeana Cove a favorite vacation destination in West Maui. This photo by Albert Highe shows a turtle coming up for a breath, with Honokeana Cove Resort in the background.

Honokeana Cove is private, calm and beautiful, perfect for swimming and snorkeling. However, its large population of green sea turtles makes it unique. These gentle giants have no particular season, they live here all year.

Green Sea Turtles, honu in Hawaiian, may seem sleepy and relaxed. However, a sea turtle shows quite a personality when you watch him engage in his “sea turtle” behavior. Our Feature Story “All About Snorkeling” describes where the turtles hang out underwater in Honokeana Cove. However, you don’t even have to get wet to observe these fascinating creatures. If you sit on the Unit 114 lanai or in a lawn chair overlooking the Cove, you’ll see the green sea turtles above the water as well: 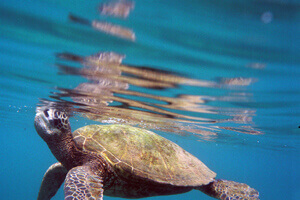 Turtle surfacing for a breath [photo by John Bentson]

During the day, green sea turtles tend to “loaf,” resting on the bottom of the Cove, often tucked underneath a coral outcrop. However, every hour or two, the turtle will swim to the surface and take a breath. When you see a dark shape about the size of a football appear above the water, look closely and you’ll see the head of a turtle who is refreshing his air supply, most often by taking two breaths, then submerging again.

Almost any time of day, green sea turtles may graze on algae growing on rocks or attached to coral. However, to really see the feast in progress, wait until dusk. Then the sea turtles start feeding in droves and because of the increased activity, they need to breathe every few minutes. Thus you will see large dark shell backs appear and heads pop to the surface, over and over until night falls.

When there’s a storm and waves are entering the Cove, it’s not good for snorkeling, but it’s good for turtle-spotting from the edge of the lawn. You might expect the turtles to hunker on the bottom, saving their energy until the weather clears up. Instead, you’re likely to find several of them feeding among the rocks close to shore. Apparently, as the storm surge rearranges and rolls the rocks on the bottom, it uncovers fresh and tasty algae that have not yet been grazed. 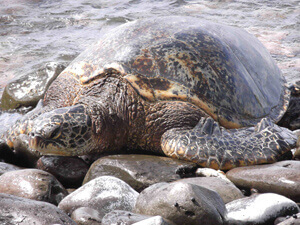 Green sea turtles, like other reptiles, are cold-blooded and regulate their body temperature by seeking warmer or colder water, or by basking in the sun. At Honokeana Cove you will often see a turtle, or a couple of turtles, lying on the pebbles near the shore, apparently dead. However, they are not dead, and due to wildlife protection laws you are not allowed to approach them or bother them.

If you watch long enough you will see the turtle ever so slowly rouse itself, then move in lurches back to the Cove. When it reaches the water it will launch itself and suddenly swim away as gracefully as you might imagine.

Besides regulating the turtle’s body temperature, basking is said to elevate green sea turtles’ metabolism, strengthen their immune and digestive systems, and provide vitamin D to process calcium and strengthen the turtle’s shell. A turtle expert at Maui Ocean Center has told us that a turtle who catches the fibropapilloma virus, which leads to growths on the soft tissue of all species of sea turtles, may dry out in the sun to help control the disease.

Sea turtles have sex like many other animals, by mounting one another. However, like everything else sea turtles do it is v-e-r-y s-l-o-w. Sea turtles most often get the urge near a nesting beach, but you may also see them making little turtles in Honokeana Cove because it is quiet and secluded. Sometimes this happens at the shoreline, just out of the water. However, they can also mate while floating at the surface. If a turtle floats on the surface for a long time, rocking from one side to the other, look closely and you may see two heads catching air and the edges of two shells. The male has hooks on his front flippers with which to grab the front edge of the female’s shell, so she is unlikely to slip away accidentally or even intentionally.

Incidentally, if you see a turtle basking or at the surface and wonder about its gender, mature male green sea turtles tend to have longer tails, extending beyond the hind flippers. Apart from this difference, it’s very hard to distinguish the boys from the girls. 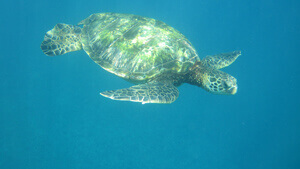 A pregnant female turtle will go to a secluded sandy beach and dig a nest. She lays a clutch of perhaps 100 eggs, then covers them over with sand.

Secluded nesting beaches exist even on Maui, far away from tourist activity. Conservation groups organize volunteers to watch over these areas during nesting season, to protect the nests and hatchlings from predators. Turtles who prefer to nest far from human activity may nest at the Mo’omomi Turtle Preserve on northeast Moloka’i and in the unpopulated Northwestern Hawaiian Islands.

Newborn green sea turtles are only about two inches long. They dig their way out of the sand and head directly for the nearest water. By the time you see them in Honokeana Cove, they have grown up sufficiently that their shells are 12 to 18 inches in length. At the Cove the green sea turtles range from this size up to about 5 feet in length. 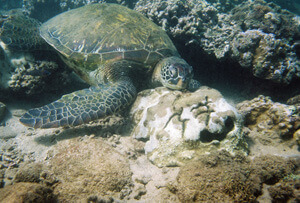 Green sea turtles are fully protected under the federal Endangered Species Act and under Hawaii state law. These laws prohibit hunting, injuring or harassing sea turtles. Swimmers and divers should be aware that riding sea turtles is illegal as it puts the animals under unnecessary stress. Fines for violating these laws can be as high as $100,000 and may even include time in prison.

With mandated protection, Hawaii’s reefs have become abundant with green sea turtles. Never grab at a resting turtle as you can literally drown them! These creatures have personalities and moods like you and I. If paid the proper respect the turtles can give you a lifetime memory.

There are subtle signs to watch for that signal that you are too close within a turtle’s comfort zone. Yawning-type open mouth movements by the turtle are one. A more deeply irritated sea turtle may give a “flipper swipe” where the turtle swipes his flipper over his forehead area. This is turtle-speak equal to flipping you off! Don’t embarrass yourself or be deemed insensitive by being flipped off by a turtle: back off if you see that flipper creep up. Other signs of turtle disturbance can include sudden awakening from a sleep-like state on the seafloor, an increase in swimming speed and diving toward deeper water.

If you’d like more information on green sea turtles, plus links to other articles, see the Sea Turtles article on Art’s website.

Make your reservation at Honokeana Cove Unit 114 and let the green sea turtles be a highlight of your next vacation!