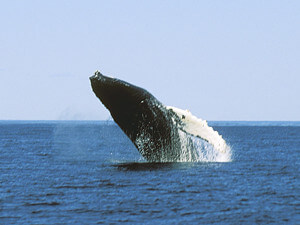 Humpback whales are the “snowbirds” of Hawaii. Like people who live most of the year in a northern state but winter in Florida, humpback whales make the same commute between Alaska and Hawaii. Therefore, they typically drift into the Maui area during October and November and gradually depart between mid-March and mid-May. As a result, their Maui population peaks from mid-January to early March.

Humpback whales are really big, forty to fifty feet in length. For example, the drawing below shows their size compared with a human diver:

If you visit Honokeana Cove during humpback whale season and choose a west-facing condominium such as Unit 114, you have a front-and-center seat for the whale show. Simply relax on your lanai with a cool beverage, or join other guests on a lounger near the pool. Moreover, we have binoculars in the 114 living room for your use. They can give you a good look at some typical whale behaviors described below. 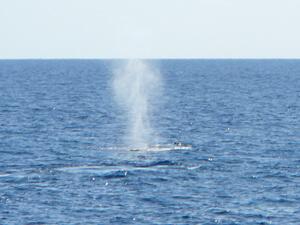 “Thar she blow!” is the shout, right out of Moby Dick, that describes the explosive exhalation of a surfacing whale. The foam and spray can be seen from miles away. Moreover, they hover in the air long enough for you to alert nearby friends to enjoy the sight.

Sometimes you will see a dark shape breaking the water without a visible blow. It’s like a black island rising from the deep, out in the middle of the water. And it has a rounded top, often with a fin showing.

Peduncle Arch and Fluke Up Dive 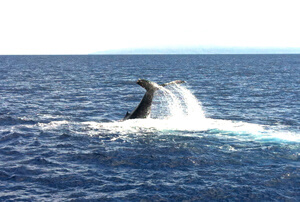 Once at the surface, after several inhalations the whale may arch its back, then dive below the surface as it lifts its tail (fluke) above the water. This fluke-up dive is almost the trademark of humpback whales. Moreover, it gives us the chance to identify individual whales, because each whale has a distinctive pattern on its fluke.

Sometimes humpback whales display their tail and forcefully slap the surface of the water. You can hear the sound miles away. It’s not merely one slap, it’s typically repeated a number of times. The tail slap is thought to be a form of aggression – males competing for the attention of a female – rather than simple communication. 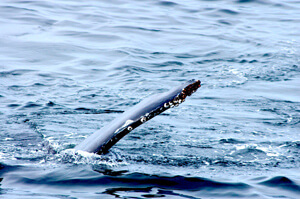 Even more impressive are pec slaps by humpback whales. In this case, the whale rolls on the surface, bringing its long pectoral fin out of the water and slapping it down. This activity is thought not to be aggressive. Pec slaps don’t expend as much energy as other types of surface slaps, so they may repeat for quite a long time.

Less often, humpback whales may breach. In a breach, they propel more than half their body out of the water. See the photo at the top of this feature story. The whale turns in the air about its long axis, then falls back to the water with a mighty splash, followed by a geyser-like plume of water.

Humpback whales may also rise straight up out of the water rather slowly, turning the head to scan the surroundings, then slip back below the water. We call it a “spy hop” because to us humans it appears that the whale is hopping up to look around. 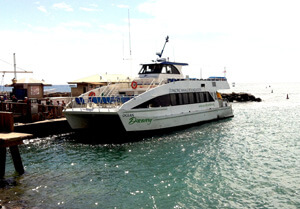 You might think that this describes all the forms of whale behavior easily observed. However, if you take a whale watch cruise you’ll see even more activities on display when humpback whales interact with one another. You’re likely to get up close to a mother teaching her calf how to be a whale, like the pair in the accompanying photo. You’ll get to see males showing off or fighting, hoping to capture the attention of a nearby female. And the ship may drop a hydrophone so you can listen to the whales “singing,” a sound that resembles a rowdy barnyard. 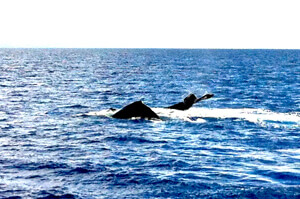 Humpback whale mother and calf, as seen on a PWF whale watch tour

We recommend the whale watch tours offered by Pacific Whale Foundation. Here are the reasons:
– PWF gives excellent value, with modern ships and knowledgeable naturalists.
– They operate both larger boats like the one shown and small inflatable rafts that get you even closer to the whales.
– We have reviewed their IRS disclosure (Form 990) and they appear to be a well-run charity.

Here are a couple of special tips:

– Become a Pacific Whale Foundation member for a tax-deductible donation of as little as $50 per year. As a result, you and your group get to board the whale watch boat ahead of all non-members. That gives you an excellent choice of seating.
– Reserve your whale watch trip early in your vacation. In rare cases, a tour between November 4 and May 15 may not find any whales. In that case, PWF will give you a “Just a Fluke” coupon good for a free whale watch within one year. If you still have days before the end of your trip, you can try again before you leave Maui.

If you’d like to learn more about humpback whales in Maui, see the longer article on Art’s website artchester.net.

We encourage you to come to Maui this winter and visit the humpback whales!